Last month I visited a tech friend of mine who has integrated Alexa and Philips Hue light strips in his hobby room. He demonstrated to me how easy and convenient it is to manage light colors using Amazon’s speech recognition Alexa. I was impressed with the systems’s integration and the new lighting experience. So, I decided to develop my own system to control lights using Raspberry PI.

As far as I could understand, Amazon Echo works in this scenario through a bridge which communicates with the Philips Hue system using ZigBee. ZigBee operates on the IEEE 802.15.4 specification, which makes it possible to transmit data between devices through the wireless network.

In this blog post, I’ll demonstrate to you how to create a voice assistant using Azure Bing Speech and Raspberry PI, which manages the Philips Hue light bulb.

1. Get your Raspberry ready

A Raspberry PI is a little computer which can be used in electronic projects and as a normal computer as well since it supports operating systems with graphic interface. In this project I’ll work with an operating system image called Raspbian Jessie RaspBee which has already been configured to work with the RaspBee component. You can download the image from this website which also offers an installation guide. In the paragraphs below, I added extra information which can help you during this step.

After downloading the image, you must restore the Raspbian Jessie RaspBee image into a freshly formatted micro SD card. For this step I’d recommend the USB Image Tool (http://www.alexpage.de/usb-image-tool/download/) which has a user friendly interface.

After restoring the image and turning your Raspberry on, I’d suggest you update your operating system. Open the terminal and run the following commands:

Now that you’ve finished the installation guide for the operating system, it’s time to connect the RaspBee module to the Raspberry PI. This module brings the Zigbee connectivity to your Raspberry PI allowing direct communication between the Raspberry PI and the Philips Hue light bulb. 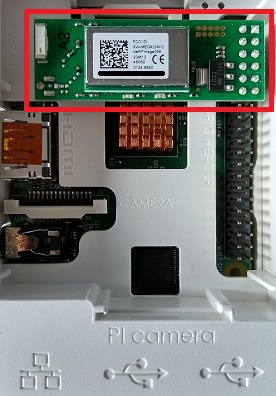 Your Raspberry PI is now ready!

The Philips Hue ecosystem includes a line of smart lamps which use the Zigbee protocol to communicate. In this project I’ll use the Philips Hue White E27 light bulb. Here is how it looks: 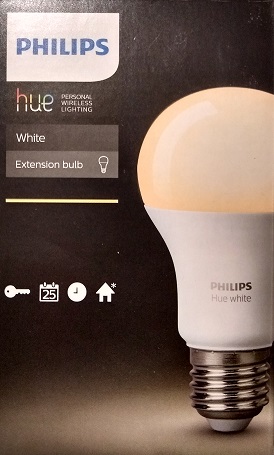 Getting started with the Philips Hue is really easy since you just need to screw the bulb into a matching light socket considering safety aspects.

After the light bulb is installed, you can turn on your configured Raspberry PI and set up the system. The Raspbian Jessie RaspBee operating system automatically starts the RaspBee tool which you can use to manage the devices connected to it. In order to find your Philips Hue light bulb, connect the Rapsberry PI to the internet and run the discover feature (www.dresden-elektronik.de/discover) in your browser. You’ll be asked to select your gateway and to enter the login credentials. You find the login credentials in the RaspBee’s quick start guide. 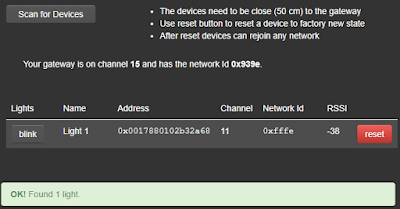 By clicking the “blink” button you can test the connectivity.

3. Develop the logic to control the light bulb using the RaspBee REST API

The python code below demonstrates all steps necessary to control the light bulb using the RaspBee REST API. In order to have authorized access to the REST API, you need an API key which can be acquired through a POST request to /api. The next API request changes the light bulb’s state to on.

The last API request deletes the created API key since it doesn’t expire and I want to keep things organized. That’s it! I added a couple of comments to the code, so it is easier to understand.

Creating a Bing Speech service is very simple. First off, navigate to the Azure Portal (https://portal.azure.com). After logging in, click new then search for Bing Speech API and request a new Speech API service. After filling in the required fields, your form should look similar to this: 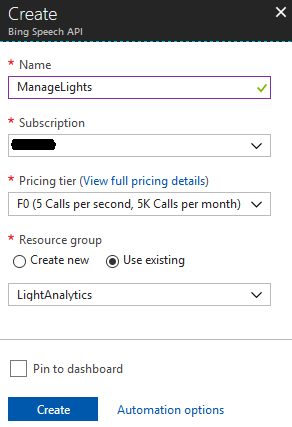 When the creation process has finished, find the Speech API keys since they’re necessary for authentication with the Bing Speech service. Here you can find them: 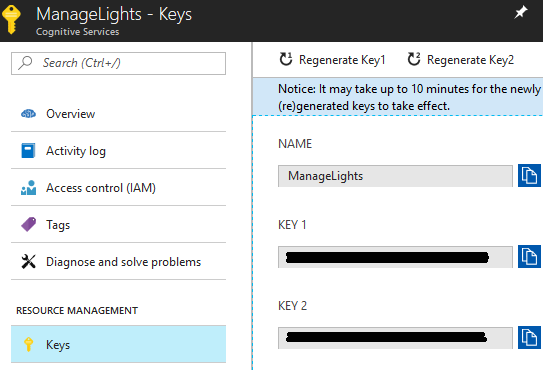 You can run the python code from different kinds of devices. For instance, if you already have a laptop with an integrated microphone, then you could use it to run the program above and manage the Philips Hue light bulb without configuring an extra system.

I want my Raspberry to work as a voice assistant, so I’ll demonstrate to you how to get a microphone working with the Raspberry. Mini Microphone is a plug and play device. You only need to connect it to your Raspberry and change the audio device settings to get it working properly. The pictures below show what my audio preferences look like. Since the audio input quality was low, I adjusted the gain of the microphone to very high: 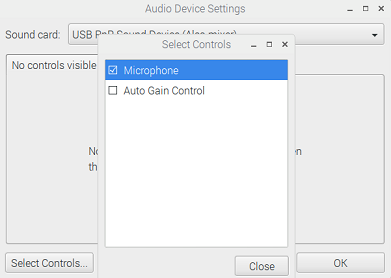 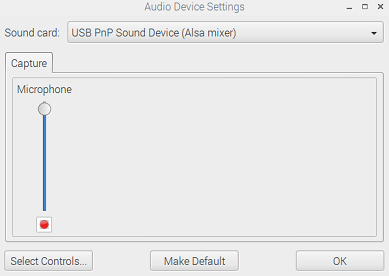 That’s it! You can run the code below in the terminal to test if the microphone was set up correctly. It records the audio for three seconds, then it plays it.

6. Develop the logic to communicate with the Azure Bing Speech API

7. Moment of truth (Run all components together)

Finally! It’s time to try all the components together. I developed the python code below which turns your Raspberry into a voice assistant to control the Philips Hue light bulb. The code consists of the code snippets above and a loop which repeats the process of audio input, voice recognition and text interpretation.

Run the python code and start communicating with it. The program understands three commands:

The picture below shows my Raspberry with all components and the Philips Hue light bulb. 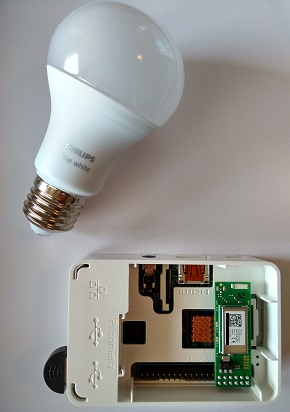 I found the SpeechRecognition library which gives support to different voice recognition systems such as PocketSphinx, another very interesting project which supports offline voice recognition. I’m also very satisfied with the accuracy and quality of the Azure Bing Speech API. I became a big fan of RaspBee which provides easy communication with the Philips Hue.

Playing around with all the components was once again very fun! I hope you enjoyed it also J