Yesterday, some Office 365 customers started seen an unwelcome user in their Teams. Along with existing owners, an Unknown User was automatically added to the Team as an owner what was/is causing confusion!

In this case, the Unknown User represents the service principal account that was used to create the Team. So far, it wasn't displayed in Teams as a member or owner, but after a Microsoft update things badly changed 🙁

You can image the side affects of this issue: community reaction, customers opening tickets and so on. Definitely, something we want get fixed as soon as possible. However, Microsoft quickly reacted to this issue. If you have a look at your tenant's Service Health page, you will notice an advisory about the Unknown user in Teams case (TM206109). Consider having a look at it if you are looking for detailed information about it.

Long story short, the problem was caused by some recently update (code change) done by Microsoft. According to the message from the Service Health, they are now working on a hotfix for this issue. Here is how the advisory message looks: 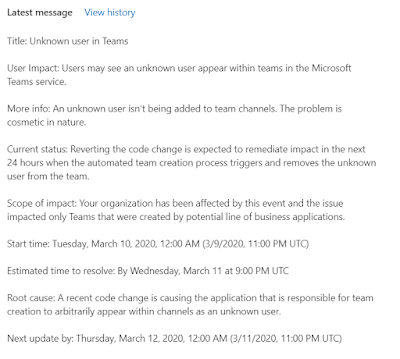 It's comforting to know that Microsoft is already taking care of this glitch. I'm looking forward to getting that service principal account out of my Teams 😊

According to Microsoft, they've completed reverting the code change and confirmed that impact has been mitigated.

If you are still seen the unknown user in Microsoft Teams, consider contacting the Microsoft support.
Posted by Jarbas Horst at 12:32 AM No comments: